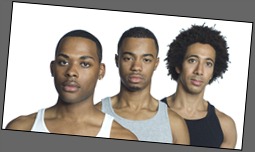 Yesterday, a fairly good friend of mine sent me this article, in which the author gives a top 5 list of the reasons that MEN who are reluctantly single remain that way. I must preface my opinions below by informing you that I am assuming that the author is discussing STRAIGHT men, but I also assume that most of these principles apply.

In short, the article explains five different prototypes of men who seem to remain single despite being otherwise irresistible. Let’s see how many of these men we know, shall we?

1) The workaholic: I believe I told you a story that alludes to this very idea. I still believe that a very large percentage of us put all of our energy into working because we believe it’s one of the few things that we seem to have direct control over, unlike our love lives. Unfortunately, though, this attitude will eventually lead us to the Coming to America conundrum in which we will have to decide whether the interested party is really into us or trying to get into our wallets.

2) The partier: The author refers to these men as those of us who think we are too flashy or sexy to remain with one guy. These are the guys that say, “I’m just here for entertainment.” Personally, I don’t know how true I believe those statements to be. I suppose I could understand, but I definitely get the sense that many of these guys are just saying that so as a defense mechanism, especially if they strike out. I do think that at some point, these guys will notice that true friends will become fewer as they get older…never mind being the 50-year-old at the club with a bunch of 30-year-olds (or younger!)

3) The shy guy: I think many of us are not so much “shy” as we are green, or “ladies in waiting.” What I mean by that is many of us spend our lives being different and attempting to conform to a world that doesn’t seem as supportive of us as they should be. We are conditioned to believe that we are less than, and for that reason, coming of age can be a very rocky period. In our proverbial emergence from the cocoon, we usually put a very similar practice into our dating lives. We want men to approach us for two reasons: a) We’re used to being rejected, and certainly are not going to put ourselves in an environment so that it may happen again (with the initial low self-esteem stemming from childhood experiences). …and b) we are used to seeing the chivalrous nature of Prince Charming as he sweeps an unsuspecting damsel out of her distress, and have longed for the day when someone will come and rescue us. Shy guys should engage in more interactive activities that stem from previous interests. Team sports or anything on Meetup come to mind as avenues for finding people to befriend.

4) The picky guy: According to the author, this type of guy is the one who is a serial first-dater. He has yet to meet anyone with whom he feel attracts him in all of the ways he feels necessary: intellectually, emotionally, spiritually, physically, socially, sexually, etc. I feel like I know a lot of men like this. However, I think the issue is not in finding “perfection,” as the author states, per se. I think the issue is more in compatibility. Some people are in tune with themselves and they know what they like or are willing to tolerate. Some of these items might seem trivial, but they are nonetheless important to the individual suitor. I do think there is a large bit of truth to the saying “You never get a second chance to make a first impression.” However, I also believe in redemption, and second chances. Gay men do often appear to be quick to cut someone off over something apparently minor. I think giving someone three dates to give you a more well-rounded opinion might lead to a more informed decision.

5) The miscellaneous guy: I assume for brevity’s sake, the author just lumps the other small percentages of men who don’t comfortably fit in any one category above together.

I would have to say that in my professional opinion, I believe the above types are very much many of the guys I have met, or know, or believe I will someday work with at Kings ‘N’ Queens. Making time to date, engaging conversation and giving people a chance are three excellent ways to ensure that even if you do stay single, you can honestly say you gave it your best shot!

How many of these men do you know? Which one are you? Why do you think these men exist, and what do you think they should do? I still believe that many of our initial problems in getting together have to do with our inability to Stop To Love. Here’s Luther: